So many Christmas carols, so many stories! Some Christmas carols are ancient, with long histories. Others are much newer. Some we thought were really old aren’t that old after all. Let’s look at four carols and learn their stories.

Long before printing presses, storybooks, and church hymnals came on the scene, stories and songs were passed from person to person and from generation to generation by oral tradition. One person told a story; others listened carefully, learned the story, and told passed it on to others. Mothers sang songs to their children; they learned the songs and taught them to their children, and so on. Possibly “The First Noel” came to us the same way.

And with the song came the question of the ages: “What on earth does ‘Noel’ mean?” Scholars speculate that the word came from the Latin term “Natalis,” which relates to birth. The term could refer to a birthday, in this case, the birthday of the Christ child. Others think that it may come from the word “nouvelle,” referring to something new to tell about. New and exciting news. I suppose either term could work. “Noel” was the French version of the word, and “Nowell” is sometimes used in English.

“The First Noel” is an ancient song – so old no one really knows who wrote the words or what melody originally went with the words. Most likely, the carol came from France, probably during the 1400s. The song possibly came across to England by way of traveling troubadours (wandering musicians and performers). The carol became very popular to sing outside the church on Christmas Eve.

The song tells the story of the birth of Jesus or at least a version of Christ’s birth. It begins with the shepherds and the angels, moves on to the wise men, and finishes with an appeal to each of us to sing praises to God for this wondrous birth. The song also includes the reason for the birth of Christ by referring to the blood that He shed to purchase salvation for all of mankind.    Listen Here 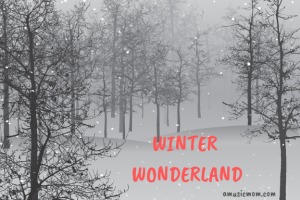 “Winter Wonderland” is one of the more popular secular Christmas carols each season. The song expresses the joys of newly fallen snow, the brisk winter weather, and the fun of outdoor winter activities. Although it was not intended as a Christmas song, it became a classic holiday song.

Richard Smith, a man from Honesdale, Pennsylvania, wrote the words for “Winter Wonderland.” For him, this was a song of memories and desires – playing out in the snow, having fun with friends. You see, Richard Smith was quite ill when he wrote the words to this song. He suffered from tuberculosis for several years. During his recovery periods, he frequently wrote jingles and ads for companies and entered contests. His memories of watching people play in the snow, and his wishes to join them, inspired the words to his poem, “Winter Wonderland.”

Smith showed his poem to his friend, musician Felix Bernard. Bernard liked the poem and set it to music in 1934. Guy Lombard and his orchestra first performed the song during the Christmas season of 1934. Richard Smith lived just a short time after writing his poem. He was only 34 when he died, but he fulfilled his dream of becoming a successful songwriter. His song “Winter Wonderland” is still one of the most popular songs of the Christmas season.   Listen Here

Santa Claus is Coming to Town

Haven Gillespie, a young man from rural Kentucky, had a dream. He dreamed of being a singer and songwriter. Gillespie left his job as a typesetter and printer in Cincinnati and moved to New York. He got a job as a printer at the New York Times. In his spare time, he worked at writing songs. His first real success came in 1926 with a romantic love song. After that, he wrote several successful jazz lyrics.

According to his publisher, Gillespie had a good vocabulary for children’s songs. The publisher told Gillespie to write a Christmas song. But that year, Gillespie was not too excited about Christmas – his brother had just died, and he was still grieving that loss. So, Gillespie went for a walk to think. As he was riding home on the subway, he took out an envelope and scribbled down the song’s words. His publisher was thrilled.

Fred Coots wrote the music for the song. Its first performance was on Eddie Cantor’s Thanksgiving Day program in 1934. The audience loved the song!  Ace Collins, an author who wrote Stories behind the Best-Loved Song of Christmas, said that this song was “one of the first songs ever intended to be released around the holidays.” “He [Gillespie] essentially created a genre.”   Listen Here

Away in a Manger

The song was first published in Philadelphia in 1885, with two verses. The title listed was “Away in a Manger,” and no one received credit for writing the words. Two years later, the song was again published in a songbook, this time using the name “Luther’s Cradle Hymn.” It included notation saying, “composed by Martin Luther for his children, and still sung by German mothers to their little ones.” So, the story grew that Luther wrote the song. But what about evidence of that? And if Luther did not write the words, where did that claim come from? 1892 saw another publication of the song,  and again, Martin Luther received credit for the entire text of the song.

To this day, the person who wrote the words of “Away in a Manger” remains unknown. Someone in the United States wrote the words during the last half of the 1800s. And what about that connection to Luther? Since the 400th anniversary of Luther’s birth had just passed, someone probably wrote the words for some celebration of this anniversary. Either that or they used Luther’s name as a marketing gimmick.

Now, what about the music for the song? Can you believe there have been at least forty-one musical settings for these words? Forty-one! Today, however, most of us know just one or two of those settings. One is more popular in the United States and the other in Great Britain. William Kirkpatrick composed the melody more common in Great Britain, and James Murray wrote the one more popular in the United States. Kirkpatrick’s melody goes by the name of “Cradle Song,” and Murray’s tune is simply known as “Murray.” Listen to the two melodies. Which one do you prefer?

Did you miss our previous discussions about Christmas carols? Check them out  here:

Christmas Carols – The Stories You May Not Know

Christmas Music – The Stories Behind the Music 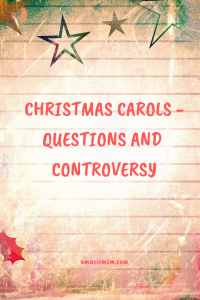